“After the first shots I managed to get away through the back window, and later that day I learned that my father was shot in the leg.” 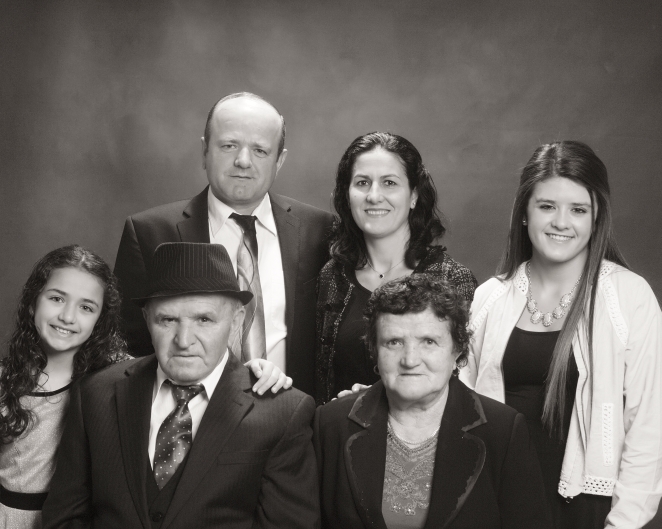 Syrja Baci runs Baci Brothers, a home renovation company, along with his brothers.

I was born in 1969 in Albania. In 1998 I came here. It was a hard time in Albania. We were democrats and they tried to kill us. Like many other families, our family had been hit hard by the reforms that the harsh communist regime was applying. In the early 1950s, my family was branded “kulak,” and its properties were confiscated. The communist regime sent my family to a labor camp in Kosove, Lushnje. My mother’s family was sent to the same labor camp.

In 1952 my grandfather on my father’s side was executed after a failed attempt to escape from prison where he was serving a long sentence for political reasons. In 1956 my father Hysni Baci was sentenced to five years in prison for agitation and propaganda against the government. In 1961 our family returned to our hometown, and settled with some relatives because all of our properties were confiscated. From 1961 to 1990 our family was the object of harsh persecution and humiliation. The same persecution was applied to us, the children. My parents and grandparents worked hard in low-paying jobs, enduring humiliation and isolation the whole time.

I went to work at a local mine in terrible conditions at the age of seventeen. I became permanently sick in my lungs and hospitalized many times. I worked there from 1986 to 1988. My brothers llir and Arjet and I decided to escape to Yugoslavia.

On January 28, 1990, we began our trek to the Yugoslavian border, walking away from the national road in fear of being detected. The weather was cold with rain. On the night of January 28th, the border guards unfortunately caught all of us. After being badly beaten there we were taken to the police station in Pogradec. After being tortured and formally tried, I was sentenced to five years in prison. So were my brothers. In 1991, I was released from prison after a government amnesty released political prisoners.

On February 20th, 1991, my brothers and I participated in the overthrowing of the dictator’s Enver Hoxha statue in the center of Tirana. On the same day we supported the student’s hunger strike to remove the dictator’s name from the University of Tirana. The police and the army intervened. My brothers and I were among those arrested. We were beaten with rubber sticks and kicked in the face by the police. After 12 hours of torture I was released and sent to the hospital where I stayed for a few days being treated for my wounds.

In March 1991, I became a member of the Democratic Party. During that time I agitated and explained the party’s program to the people. I was threatened by the communists, and in March 1991, as a result of election manipulations, they managed to stay in power. But on March 22, 1992 in the next election, which came about due to our protests, the Democratic Party was elected. My family and I have always supported the Democratic Party and its leader Sali Berisha because we were promised freedom and that our properties would be returned.

However, we never got our properties back. As a result of this, my father, brothers, and I had no choice but to enter the hunger strike, organized by the Former Political Prisoners of Albania, in August 1994, to request the return of our properties. The police arrested the strike’s leader and others. We continued the strike from August 15th–18th, 1994, in three different houses of three different villages, from which we were once again forced out.

In March 1997 the communists came to our house and wanted us to transport arms for them to overthrow the democratic government. At first under pressure and fearing for our lives, we pretended to accept so they would go away. Later my father advised us to go into hiding and not obey their orders, and that is what we did.

On May 16, 1998, I was attacked by the communists in the village of Dunice, where my father and I were hiding. After the first shots I managed to get away through the back window, and later that day I learned that my father was shot in the leg. I went to Tirana where I stayed a few days until I found the necessary passport in the black market to enter the United States.

I flew to Amsterdam and then to Detroit. I spent three months in a detention center in New Jersey for refugees. In the refugee camp, I had a first hearing with the judge. The judge says that she couldn’t wait to give our family asylum, and see our whole family here together. My wife came three years later.

It was very hard to learn English, but we got some support. We took classes at DCCC (Delaware County Community College). My wife is a manager at Whole Foods. My wife’s parents came here too.

Here I feel happy, comfortable and safe. Three of my brothers and I have a business called Baci Brothers. We do home renovations. We are happy to live in this country. It is our dream come true. Our parents came here too. My father is so happy to be here, he keeps an American flag on a pole in his yard.

Portraits of People on the Move tells the stories of Philadelphia-area immigrants through their own words on the Supperdance.com blog and was first shown as an exhibition June 25–28, 2015, at the Gray Area of Crane Arts in Philadelphia. The exhibition was created as a companion work to Supper, People on the Move by Cardell Dance Theater, a dance inspired by themes of migration.