“From Ecuador to Guatemala we travelled in a boat. The ship got lost in the middle of the sea. For ten days you could only see water and sky.” 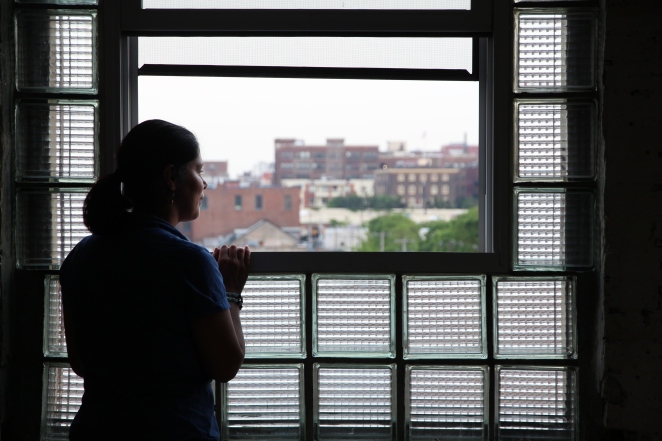 I came here fourteen years ago from Cuenca, Ecuador. I was seventeen and had a child who was two years old. I didn’t really see me having a future there or being able to offer a future to my child. Many times I wasn’t able to buy clothing for him. I had no job, no profession. I was so young. The second thing, my parents were getting older and by the middle of the week my mother wouldn’t have groceries in her kitchen. I would visit her and she would want to offer me a plate of food and she didn’t have any. That was really heartbreaking for me—I wasn’t able to help them.

I had all these dreams and plans that I would make a lot of money. You have this idea that you will get to the US and you find money everywhere. People who are here send beautiful photos and nobody tells you the reality. I also wanted to escape. I felt somehow trapped in a little town where there was a lot of machismo and a lot of “women don’t do this and women don’t do that” and I didn’t like that.

Instead what happened was this: my now ex-husband was here already. He came six months before, the same way I did, with the same amount of debt. He wanted me to wait, but I didn’t want to. He left me in his parents’ home. I wasn’t happy there at all. When I came (to the US) I had a second child. My older one stayed in Ecuador. He was two years old. I left him with his grandparents. I left him there and embarked on a trip.

It took three months to get here. From Ecuador to Guatemala we travelled in a boat. The ship got lost in the middle of the sea. For ten days you could only see water and sky and we were eating only once a day. There were 90 women and more than 200 men. In Guatemala they transport us in a tuk-tuk (pedi-cab) and the rest of the travelling was by lakes, car, and walking. One time there were a few horses and I was happy to ride because I grew up on a farm. There was a period when they abandoned us in the middle of the woods for ten days and we survived eating oranges until they found us again. In Guatemala I was on the phone with my husband and he got really mad. We didn’t realize people were listening and a voice came out of the phone. They said, “You will never see her again, we are going to kill her tomorrow.” The next day there was a really tall man with a gun and he came to me with threatening voice, “Just be thankful I am also from Ecuador another person wouldn’t care about shooting you.” It is like the mafia.

Our group was assaulted when we were about to cross the border. They had guns, they know where you hide your money. I think it is all arranged. Someone put a gun to my head. I think I was in shock. We walk across the river and we crawl for about six hours. They had watered the plants where we had to hide so we were full of mud and it was impossible to run. And then we needed to run and I couldn’t. They left me behind. I had no more energy and I was gong to pass out. I had no idea where I was. I just started walking slowly. I saw plants moving and they were waiting for me. We got to a house. They took a group in a car so I didn’t have to walk in the desert. I think I wouldn’t have survived. I was so skinny and so tired. They put people in a van and bring me to Philadelphia, where my husband had arranged for me to get dropped off. After two weeks I started working in a meat packing factory.

My husband had a serious problem with alcohol. I was pregnant and we had a car accident because he was drunk and I almost lost my baby. I was with him 5 years. I started working in another factory, a company that sewed bags and special covers for airplanes for the army. I was a machine operator. I worked there two years and a half. They asked me to be a supervisor. I was in that position for two months. There was a woman who was really racist and was treating me really badly. I didn’t speak English, and the people I was working with didn’t speak English or Spanish, they were mostly Cambodian and Vietnamese, so we just communicated by signs. After that job I started doing housecleaning. I really started to think I should learn new things, get my GED. Then the problems started at home. My husband was very controlling and he never supported me to learn English. Things started going down the drain, he started using drugs. I left him, I left the house, I left everything and took my child and started building my own life. I was very depressed because my older son wasn’t here. I always felt guilty.

He is here now, thank God. He came four-and-a-half years ago when he was 12. He did a similar trip that I did. He got here Thanksgiving day on my birthday. It changed everything. It erased whatever bad happened in the past. My younger one was born here so he could travel. Both of them are special in different ways. They are my world.

I never took English classes. I dedicated myself to learn. I went to the library and rented a bunch of kids’ cartoons. I would watch Barney and Sesame Street and Dragon Tales. I watched the Maury show. I put the subtitles on to learn. I read.

Looking for a GED class, I got to an organization that taught computer classes and English classes to immigrants. When I got there I had the feeling this is a place for me, I am going to work here. I had never turned on a computer. After I took that first class I was asked if I would be willing to teach a class. How am I going to teach something I don’t know myself? But I liked challenges, so the director trained me. I started teaching a power point class. I prepared my entire class. There were 15 students. I have never taught anything, never spoke in front of a group. When I started trying to teach, I forgot everything and just started crying in front of everyone. They applauded me and said don’t worry about it, we will learn together.

When I arrived, my first thought was to tell my mother I got here safe. For three months I wasn’t able to talk to her. But then I had this feeling, what have I just done? I got a feeling like if I run to the corner I can catch a bus to go back. I cannot go back. My mother didn’t want me to go, she was really mad at me, but she didn’t know it was for her too. I have helped her ever since.

Portraits of People on the Move tells the stories of Philadelphia-area immigrants through their own words on the Supperdance.com blog and was first shown as an exhibition in June 2015, at the Gray Area of Crane Arts in Philadelphia. The exhibition was created as a companion work to Supper, People on the Move by Cardell Dance Theater, a dance inspired by themes of migration.