“I am 21, and I have not felt safe for my whole life.” Some details of Sarah’s story have been changed to protect her identity. 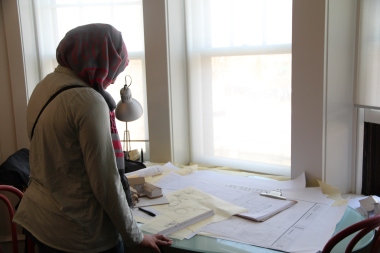 Saddam Hussein targeted my family—we are Shia. His army came to our house and broke in, my father was arrested three times and tortured in prison. We couldn’t say publicly that it was Saddam Hussein who did that, and my mother would say to us, me and my sisters and brothers, that he was a good leader, in order to protect us from him. In 2003 there was war. I always say I have mixed feelings about the war: the US saved us from Hussein, but it was war and it was terrible, but we made it through alive.

I was nine years old at that war. In 2006 I was kidnapped. After I was returned, my father decided we should leave the country, and we went to Syria. We lived there for three years as refugees. Things were getting worse in Syria also, it was the beginning of the war there, my family was poor, and we had no choice but to return to Iraq, which was nothing but bombs, kidnapping, and violence everywhere.

I wanted to educate myself more about my religion, and began reading the Quraan. I started to read about other religions as well. I felt that I was in an Iraqi Muslim bubble; I really wanted to see the world outside that bubble. I wanted to learn more about other people, so I started to teach myself English by watching movies. I wanted to be able to use the internet to talk to other people. We had internet in 2011. I watched movies and try to speak with people of other faiths. I realize we all have things in common. I remember my teacher says Jewish people are evil and Christians do not follow the right way but I read in Quraan to respect Jews and Christians. I ask my father, I said you have a Christian friend and he is kind. My father said, “Do you believe teacher or Quraan?”

At fifteen I started reading everything I could to better understand the world—not considered a good thing for girls to do. My father did his best to get books I wanted to read. I started to talk to friends saying that we should give minorities in Iraq their rights. I received many bad comments but I kept going. I made an effort to understand the hostility between Sunnis and Shiiaes. I went to the University of Bagdad. My immediate family was happy for me, my extended family was not happy with what I was doing. Because of my activism, I was selected by the US Embassy for a summer program to study in the US. Five students from Iraq were chosen, twenty students altogether from the Middle East. We studied religion, American democracy and American history at an American university.

It was my first time visiting other places of worship. We visited churches, synagogues, a Buddhist temple. I posted photos of different places of worship online trying to tell my friends, “Look, I worshiped in other places, we are all the same. I have the same feeling as in mosque.” A militia group in Iraq—so prejudiced—think only Shia will go to heaven so I was against them from the beginning. They saw my posts and knew I talked to others and would continue to do so. They told my father your daughter is a spy for the US and she is not a good Muslim. She is dangerous and should be killed, and so I couldn’t go home. If she comes home we will kill her, she should stay with kuffar (Arabic insult for nonbelievers). My father, in order to save his life and the rest of my family, said he did not support me and I was wrong.

Because I believe that all these problems are because of prejudice, I believe we should have a secular government. They try to stop me but I will not stop. I think religion is personal. We don’t have to be the same, but we do have to find a way to live together. I was freaking out, so worried about my family and worried about myself in a new country alone. My friend Jacob said don’t worry I will help you. His parents found a lawyer for me who took my case for free. His parents got me a cell phone and gave me money and found me a family to live with. I have lived with them for six months and they treat me as one of them.

The asylum process is very long. I have a lawyer, wrote my story, had fingerprints taken, and I will have to go before a judge who will decide. I can’t work, and I want to go to school but I can’t get financial aid and I do not have money. My family is trying to get out of Iraq to go to India. Jordan is not taking refugees any more, and neither is Turkey. It is not easy to get a visa: to come here it takes at least five years. I could apply for my family if I had a green card. If my asylum is approved, and there is no way to know how long before I get a hearing, it is then one more year to get a green card. Then I can apply for my parents and siblings under eighteen. The two older ones couldn’t qualify.

How can I describe being here? I am happy to have freedom that I didn’t have in Iraq. I can go to where I want, to places of worship. I can meet people from other places; it is very diverse. Another part of me is really sad. I can’t go home again. I put my family in danger. I know that I didn’t do anything wrong, but people don’t understand. I go to the social service agency to try to help refugees. The US Embassy program has two groups per year. I was an intern for the group that came after me. I don’t have to sit alone in secret when I want to read. I go to interfaith groups to try to create more dialog to understand each other. I am trying to get into school. I visited Community College but it costs $1300. per class. I want to study architecture. Baghdad has been destroyed by bombs and war. I want to help rebuild. And someday I want to build a place of worship where people can worship together no matter what religion they are.

When I call my family, I miss them so much. I don’t show them, but then I cry and cry. I miss my traditions—sitting on the ground to eat, not in a chair. I miss going to my grandparents’ house every week. People don’t do that here. Families live far apart. My extended family thinks I am terrible. I pray for the day when they can accept me. I also pray for the day when Iraqis wake up to the sounds of birds, not bombs. In Iraq our lives are so cheap. Three hundred people die every day from bombs. In the US my life is more important. I had a tough life and I don’t want others to go through what I have, so I want to work for peace.

Portraits of People on the Move tells the stories of Philadelphia-area immigrants through their own words on the Supperdance.com blog and was first shown as an exhibition in June 2015, at the Gray Area of Crane Arts in Philadelphia. The exhibition was created as a companion work to Supper, People on the Move by Cardell Dance Theater, a dance inspired by themes of migration.